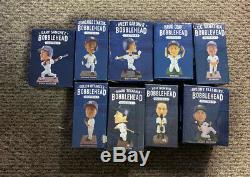 For Sale is a Lot of 15 New York Yankee Stadium Bobble Head Giveaway. Collection is like new and have been out of the box for the picture now are packaged again. Mark Teixeira June 19, 2014.