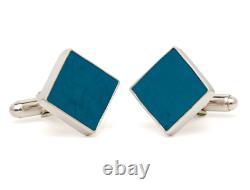 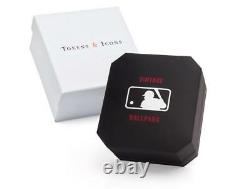 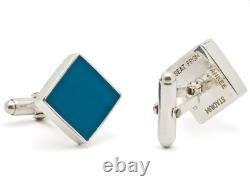 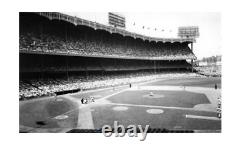 Set in sterling silver with swivel findings, these cuff links feature the weathered painted surface of seats from which fans cheered for decades. Measures 5/8" square and back hallmarked "Seat From Yankee Stadium. Officially licensed by Major League Baseball, each pair of cuff links comes gift-boxed with a Certificate of Authenticity. The 1970's found most Major League Ballparks converting to plastic seats from wood. This product is crafted from the old, wooden seats. Due to the age of the wood and uniqueness of the seats, no two products will be exactly the same.

The painted surfaces may be multicolored due to layers of paint. Yankee Stadium opened 1923 and was nicknamed "The House that Ruth Built" by Fred Lieb, sportswriter and baseball historian.