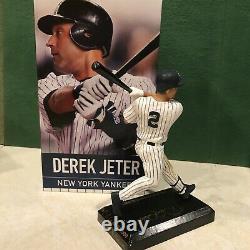 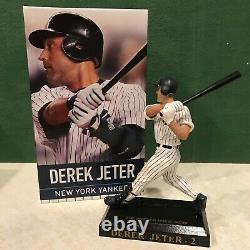 Up for sale is a Derek Jeter Final Season Figurine Giveaway (SGA) from the 2014 season, Jeter's final season as an MLB player. The statue/figurine was only given out to the first 18,000 fans in attendance and was not made available in stores, making it a rare collectible. The statue/figurine series has been sponsored by Sports Authority & PC Richards and is part of a series of eleven that includes Derek Jeter ('06), Bernie Williams ('07), Mariano Rivera ('10), Jorge Posada ('11), Mark Teixeira ('12), Andy Pettitte ('13), Derek Jeter Final Season ('14), Dellin Betances ('15), Brian McCann ('16), and the Old ('08) and New Yankee Stadium ('09). The statue is in absolutely mint condition and has never been opened - it remains in the styrofoam packaged box. The one pictured above belongs to my personal collection, once again, yours will be brand new, new in box.

If interested in any of the other figurines in the set, feel free to message me as I have others available as well! This item is in the category "Sports Mem, Cards & Fan Shop\Fan Apparel & Souvenirs\Baseball-MLB". The seller is "yanksfan2008" and is located in this country: US.