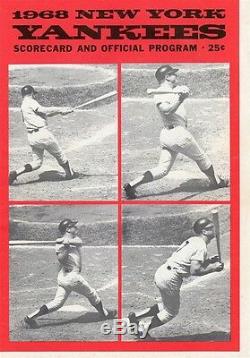 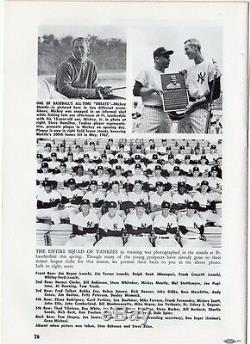 Mickey Mantle Last HR 1968 Program New York Yankees. On September 20, 1968, the Yankees were playing the Boston Red Sox at Yankee Stadium in front of a small crowd of just 15,737 fans. In the bottom of the third inning with nobody on base and two outs, Red Sox pitcher, Jim Lonborg, was protecting a 1-0 lead when Mantle stepped to the plate. The Mick uncoiled on one of Lonborg's pitches sending a whistling and curving line drive into the right field bleachers to tie the game. It was Mickey's 536th and last career home run. It was also his 266th home run at Yankee Stadium (another record) and 18th HR of the year. Mantle went 2 for 4 in this game, hitting his 14th and last double of the year also.

This is the game Mantle had his last two extra base hits. The Red Sox won the game 4-3 as Carl Yastrzemski hit his 21 HR of the year. Program is unscoredand has players averages on score sheet as of Sept.

Very scarce and historic item. Comes with play by play print out of game. What is also great about this program is that it has Mantle on the cover and other info inside the program. I think the hr program is rarer as attendence was less and better as Mantle hit a HR, but they make a great pair!

I was at the second last game of the season Saturday September 28, 1968 at Fenway Park. An unimportant game as the Yankees and Red Sox were out of the race.

Mickey Mantle got up in the first inning and poped up to Rico Petrocelli at shortstop. To me, from my first base seats with my brother and father it looked like Mantle was almost trying to sacrificed bunt Horace Clark to third base. Clarke opened the game with a walk and stole a base.

I was was a Mantle fan as was many of the 25,534 in attendance who gave Mantle a hand even though he got out. To start the bottom of the first Andy Kosco replaced Mantle at first base.

Manager Ralph Houk pulled Mantle from the game giving him the day off and letting him skip the last game Sunday to go home to his family. I met Mantle years latter at a book signing and asked him to sign the 1968 Boston Red sox program telling him it was from his last game. Mickey asked me was my last game in Boston? I said yes but he could not remember it and could not sign the program as the book signing was for his book only. Mantle looked at the program but did not sign it even though it seemed he wanted to.

Program comes with a printed play by play of the game that can be filled in. See mantle tickes in my store. Sign up for Free Sports Collectors Newsletter add me to your favorites list.